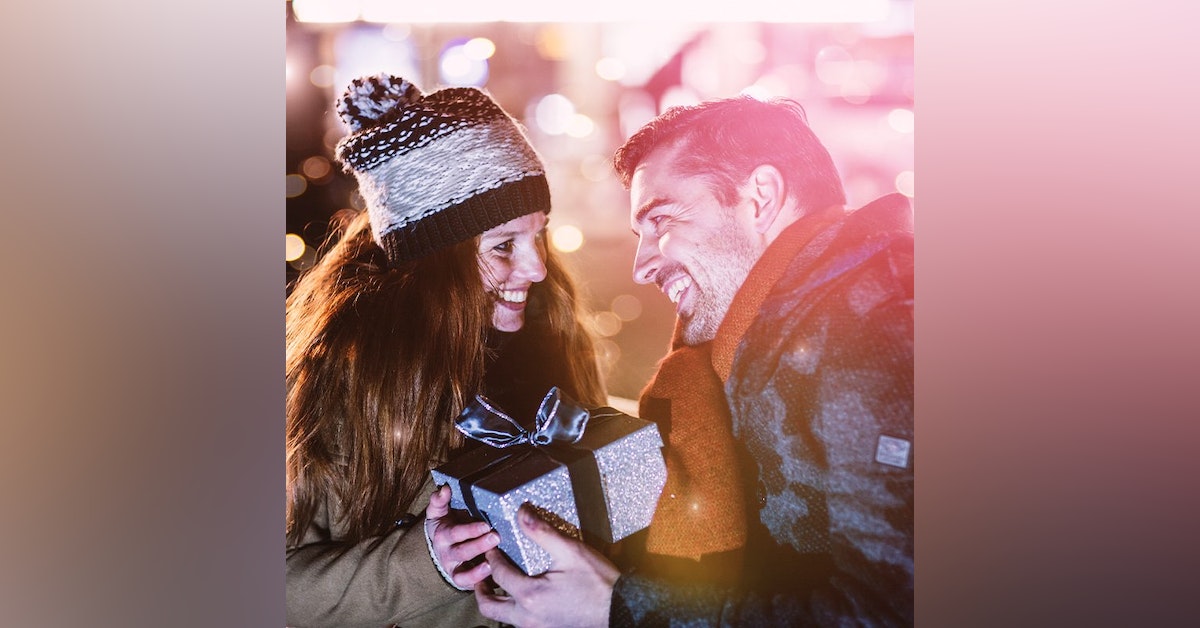 An overworked business woman takes a new job in the midwest winter wonderland town of Tiny Christmas, Iowa. As her Christmas spirit starts to warm up like a hot cup of cocoa something isn't quite right and giftwrap isn't all that's hiding things.

I had an unremarkable first night despite wondering just how many “disappearances” Jake had accidentally inferred. I tried not to concentrate on it too much, I was starting my new job the next morning after all.

Holidays And More! occupied the largest building in town. It was two floors of highly polished marble and glass. The first floor held the perfect area for a window display, but was currently empty. “This will be my canvas,” I thought.  I put my hand up to the glass wistfully only to have it slapped from the otherside of the glass by a burly man with a beard.  I jumped back and he let out a chuckle and motioned me to come inside. “I’m Mr. Santan the general manager,” The burly man explained, giving me a firm handshake. “Great to meet you in person. Thank you so much for the job.” “We’re just so pleased you accepted it.  The entire board was unanimous in the decision to hire you. Your plan for a Christmas display that gets us back to our roots is genius!”  “Thank--” Before I could finish he pulled me in for a hug. “Say no more, Ms. Adler, we’re just so happy we can add you, another true believer of the magic of Christmas, to our wonderful family!” He said while patting me on the back. I recoiled slightly and he seemed to catch my discomfort and let me go.  “Sorry, I just love Christmas so much, I get carried away sometimes.” “Thats… I just, I should probably get to work, right?” I deflected. “Oh, of course!  There’s only two weeks till the big reveal after all. I’m sure every second counts.”  Mr. Santan led me over to my workspace and introduced me to my assistant, Tom Thompson, a tall and slightly too handsome man in a red vest. I felt.. Uncomfortable looking at him for too long, like I might, I don’t know, blush if I did?  “You know Tom, you could take notes from Ms. Adler here,” Mr. Santan said before leaving, “Up your holiday game a little and maybe you’ll be the next one promoted!” Tom looked towards me and let out a little sigh, “Yes sir.”

On that first day, we spent most of our time going through boxes, taking inventory of what supplies the store already had so I’d know what we would need to buy. “So,” I broke the silence, “Mr. Santan wants you to up your holiday game, eh?” “Yeah, I guess he’s noticed I haven’t been my normal cheery self for that last.. Couple years” He seemed as surprised by that timeline as I did. “That’s a long time not to be happy.” Like I’d know what happy was.  I was a weirdly employed graphic designer caught in what was increasingly feeling like a low budget Christmas movie. “I guess so, I just haven’t been myself since my wife died.” Ohh, he was single and not even the divorced kind!  Widowed, the good kind of single! I stopped going through the box of christmas lights, my hands were shaking. “Yeah, it was really tragic. She hit a deer..”  He was going on about his dead wife, but all I could concentrate on was my own heartbeat as it began to speed up.  Why did I care if this guy was single? What was happening to me? I concentrated on regaining my composure.  I just needed to take it easy. This had been a big move, a huge change, and I’d lost my bearings. It was perfectly reasonable that I would feel confused and even want to fit in. Things would get less weird once I was used to my surroundings.  “...and that’s when we took her off life support.” Oh god, he was still going, “I just don’t think I’ll ever really love anyone again, you know?” “I get it, but you’re young, you’ll meet someone again when you’re ready.” I tried to console.  He blushed slightly. “You’re a really good listener, you know? Hey! Would you like to come over for dinner on Sunday? We make a big meal after church so it’s always nice to have some extra company.” “Oh no, no, I don’t want to impose, we don’t really know each other and--” “Please? Think of it as me repaying your kindness for letting me dump all my problems on you like this.” He begged. “Well, when you put it that way, sure.”

After a relatively uneventful week, I awoke from a particularly weird nightmare at 3am Saturday morning to the sound of talking. Frustrated and groggy, I did what any good New Yorker would.  I pushed the window open with a level of violence that this house had probably never seen and leaned out into the dark. “Shut the fuck up or I’ll fucking come down there murder you!” I yelled, the, slammed the window shut, and lay back down. It was quiet for a minute, but then, was that chanting? By that point my complete consciousness had returned and I realized that I was no longer in an apartment, I was in a house.  I was in a completely isolated house. No one should be outside.  I lay there in silence, trying to get a grasp on what I was hearing. Chanting? Crying? Maybe it was a wild animal, I thought. I’d heard foxes kind of sound like people. I honestly didn’t want it to be people or animals, both seemed like they could be dangerous and for the first time since the day I’d moved in, I considered what the word “disappearances” could possibly mean.  After what may have been hours the strange noises dissipated, but I did not sleep for the rest of the night. In the morning, I decided maybe I would put up those Christmas lights. The house had no exterior lighting at all and seeing as it had sat unoccupied, there was a chance someone could still think it was vacant and try to break in.. if the noises I’d heard were people anyway.  If it was foxes or wolves or something, the light should deter them too. Despite being opposed to my core beliefs, I’d do it for my safety. I found a box with one whole strand of lights in it in the basement. Just enough to do the awning out front.  I figured it was better than nothing and it also meant I didn’t have to spend all day putting them up, so win win. There was however, another box in the basement.  I’d thought it was more Christmas decorations originally since there was a piece of garland at the top, but when I brought it upstairs I realized that what I had really found was a gun. A shotgun of some sort, to be more specific. Along with it was a little box with just a few bullets in it, seven, I counted.  I’d never really handled a gun before and felt conflicted about realizing that it had been in the house with me for the last week. Who’s was it and why would they leave it, anyway?  Shit, for all I knew, all houses in Iowa came with guns.  After some careful contemplation and youtube videos, I decided to keep it by the door, loaded, in case I did end up running into whatever I had heard the night prior. When I heard the noises again that night, I at least managed to convince myself I could protect myself and got the smallest bit of sleep. By the time Tom came to pick me up on Sunday, I was already exhausted and a little jumpy. “You look tired, are you ok?” He asked as I fastened my seatbelt. His genuine concern made my heart feel all warm for some reason. “Yeah, just insomnia.” “I used to have that real bad when Joanne first died.  It’s hard being in that house all alone, huh?” “Not really. Why would it be hard?”  “I just guess I find being alone really difficult. Everyone needs someone to hold at night.” He informed me. Was he suggesting he wanted to hold me at night?  We arrived at his parents' lovely little colonial only a few minutes later.  I may have neglected to say this, but he’d been living with his family since his wife died.  I thought it was a little weird, but I also knew grief could really mess up a person, so it was better I didn’t judge.  Anyway, the house was all decked out in a literal ton of blinking christmas lights, outside and in. It was really too distracting and tacky for my taste. His mom and dad hugged me immediately as we entered and thanked me for taking such good care of their son. Did they think we were a couple?  Did I want us to be a couple? What? No! We had a nice dinner and his family told me stories about what Tom was like growing up. After dinner they wanted to sing Christmas carols so his mom gathered us around the piano as his father played. I don’t know any full carols, but I managed to stumble through alright. We laughed a lot. It was.. It was really nice to feel like I was part of something again. It made me miss my parents terribly.  I wanted so much to feel safe and loved like that again. Maybe, I thought, just maybe the Thompsons could be my new family. Maybe this place could be my new something to be a part of. We kissed my driveway before I got out of the car.  He told me he was falling for me. Maybe I was falling for him too.

I woke up in pure panic at 3am. I wasn’t even aware of why I was so scared for a minute until the events of the evening came back to me.  Something was terribly wrong with me. And the noises were back.

Ajeet let out a sigh. How many times, he wondered, was he going to help someone flee from a crime scene? This couldn’t be worth the money. He’d be better off working for one of those takeout services. Yeah, he was going to sign up once he got home. No more transporting crazy people, just transporting food to crazy people.  “Wait, weren’t there 8 of them total?” He asked hoping this didn’t set her off,  “Didn’t you say that gun only had seven bullets? Doesn’t that mean you missed one?” Rachel thought for a second. Nope, she’d definitely shot 8 cultists, she’d counted. “I guess you could call it a Hanukkah miracle,” she giggled. Ajeet let out a fake laugh, not sure what she meant. “So.. airport then?” “Yeah, please.”