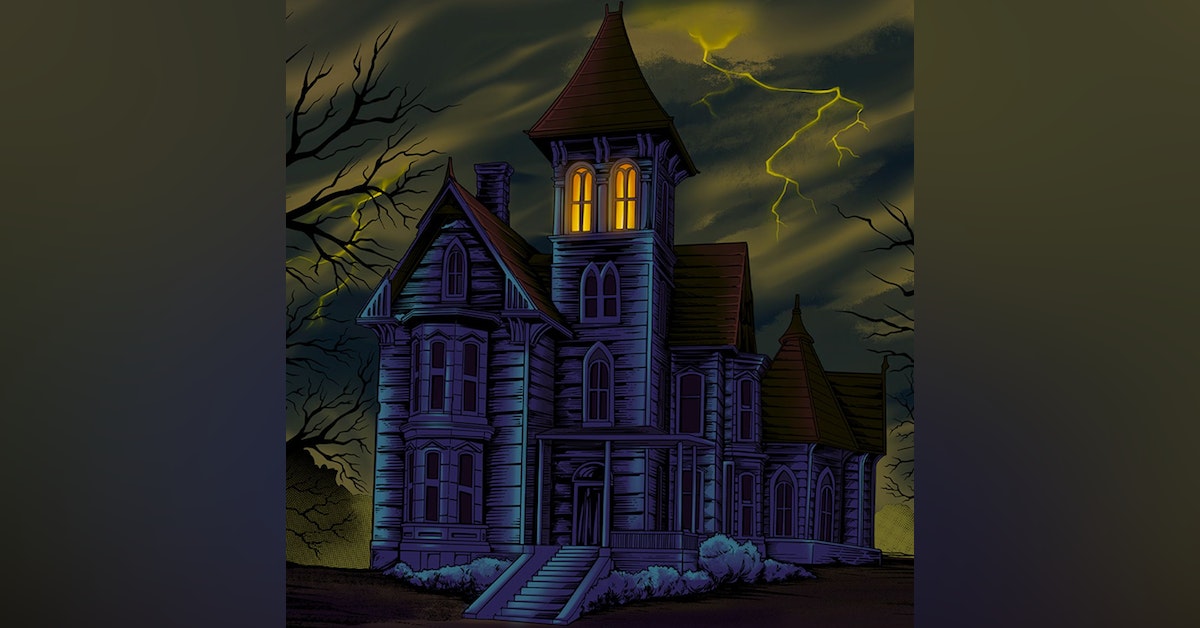 Things are heating up at Grimm Manor as Bethany begins to sort out the secrets behind the walls of MURDER MANSION. Who will survive, if anyone?

Listen and find out!

Support us on Patreon...

Things are heating up at Grimm Manor as Bethany begins to sort out the secrets behind the walls of MURDER MANSION. Who will survive, if anyone?

Listen and find out!

This episode sponsored by
HenFlix.com

For everything else visit
WeeklySpooky.com

Bethany Martinson is returning to Strickfield after spending a week in Shore City. It’s a very dark and stormy 4th of July night as she’s almost home when she’s forced to take a detour.
She hits a car in the middle of the main road. Upon seeing that the car has dead people inside from well before wrecking her car, she walks in the storm until she comes to Grimm Manor and enters. Trapped inside the mansion, she meets up with three former detectives she has history with and the owners themselves, August and Dorothy Grimm.
Bethany is escorted to a bedroom where she goes to sleep.
In the middle of the night, Bethany decides to explore the mansion. As she crosses the living room, she sees both Dorothy and August Grimm are dead – hung by their necks.
Shortly after, a ghostly apparition appears to snatch Bethany and take her away.
The three former detectives are racing against Bethany to try and find the hidden fortune of Beauregard Grimm. They end up in the attic, where they narrowly escape from their near-death experience.
When they’re back in the mansion, they see things that make them regret coming to Grimm Manor and manage to escape to the seemingly endless graveyard out back.
Back in the mansion, Bethany survives and manages to solve her way through a few more challenging escape room scenarios. However, the apparition returns for her. As she tries to run, a trapdoor opens and makes Bethany fall to what seems to be certain death.
And now . . . the CONCLUSION to Murder Mansion . . .

I don’t know what really happened. I just know that I fell into this black void. I couldn’t see a floor or anything. Now I sit up and see I’m in what looks like an attic. I stand up and look around. How many attics have I been in in my life? I remember how Mom and Dad set me up in the attic when we moved to North Ridgeway. That was around the time when they were having me tested so that people in white coats could tell me I have a mutant brain and belong in a special school for the gifted.
Now that I’m in this particular attic, I’m reminded that I’m potentially in terrible danger. It’s obvious I’m in another escape room and have to figure my way out. Then I see the obvious door and make my way to it. I grab the knob and start to open it.
Suddenly, the door yanks itself out of my hand and slams shut.
“Aw, come on!” I mutter.
And then the weirdest thing happens. The door suddenly becomes . . . sucked right into the wall until it’s gone and there’s only the wall itself now. Like there was never a door to begin with. Remembering this house has power, I look around and find a light switch. After turning the lights on, I look around some more.
I see something weird in the far corner near the window, like something’s moving. I walk to it and see a full-length mirror behind some stuff. I gasp at the reflection looking back at me now – with purple hair and red eyes.
Remembering that hall of mirrors, I quickly back away from it.
“Ya can neva escape me, Bethy.” My reflection has a Brooklyn accent. “You an me are togetha fa life.”
I shake my head quickly. “Go away, Harpy! You’re evil! Why are you torturing me like this?”
“Call Harpy whatcha want. I just wanna experience life tha way you do. Ya can’t keep me locked away in our body foreva, Sissy. It’s just as much Harpy’s body as it is yours.”
I tighten my fists. “No! You’re evil! How do I know you didn’t kill August and Dorothy Grimm?”
Harpy laughs and smiles her wicked smile. “Accuse Harpy all ya want, Bethy. Howeva, ya got bigga problems ta deal with right now.” She points to her right – my left. “Look!”
I see the floor is starting to move in that other corner. And then my stomach drops fast!
“Spiders!” I scream. “Oh, God, not spiders!”
My heart’s really pounding, and I’m so dizzy! Then my eyes roll up in the back of my head as I fall and pass out – from extreme fright!

I open my eyes an sit up. Those spidas are almost ta Harpy, an they ain’t comin’ ta me ’cause they wanna get friendly. No, they’re black widows. Harpy’s here, an she’s in full control now. No way things’re endin’ like this!
I quickly move to my feet, which actually scares the spidas so they back off. “Boo!”
Then more a tha creepies move away. They want nothin’ ta do with Harpy. They could get Bethy ’cause she’s always been scared a spidas. Not Harpy. Harpy ain’t scared a nothin’!
Time ta get outta here. I look around an see a portrait a Dorothy Grimm to tha left of a trunk on tha floor an go examine it.
There’s a numba here on tha frame – 39. Numbas are clues! Tha lady in tha portrait’s pointin’ right at Harpy. Then, I spin around an see tha trunk behind me.
Tha spidas keep movin’ around fast. They want Harpy, but they’re afraid a her. Without anotha thought, I grab tha lid an rip it off. Hey! There’s a ladda in here! I git inside tha trunk an stawt climbin’ down.
When Harpy reaches tha bottom, she’s in a corridor. Only got two directions ta move. I see tha burnin’ torches lightin’ tha way an follow’em. I turn down one corridor an then anotha. Harpy walks for many minutes.
Then I rememba August Grimm’s story about how people who die in this area come ta this place. Well, Harpy ain’t dyin’! An Harpy ain’t lettin’ Bethy die, neitha. But Harpy’s gotta problem now. Harpy’s gettin’ hungry, an she’s gotta eat just like Bethy. I’m thinkin’ lotsa sweets! But Harpy’s gotta get outta here first.
I follow tha torches an come out a secret panel ta end up back in tha house an on tha first floor.
Suddenly, that phantom that’s been shakin’ up Bethy appears. Aw . . . It wants ta play with Harpy. I scream in delight an run. The phantom stawts chasin’ Harpy, all while laughin’ like in those scary movies Bethy watches.
“Harpy’ll play with ya!” I call ovva my shoulda. “C’mon!”
The phantom keeps chasin’ Harpy. I turn down anotha hallway an keep runnin’. When I see tha phantom’s hand’s almost on my shoulda, I laugh a little.
“Oh, ya wanna play tag?” Then Harpy runs fasta.
I reach a door at tha end a tha hall an open it. When Harpy slams tha door shut, tha phantom floats right through it an keeps laughin’. Then I move ta anotha door an open it ta take me out into tha storm.
“Yes! Harpy is free!”
I laugh joyfully as I experience bein’ outside for tha first time evva. Yeah, Harpy’s all wet now. Tha clothes I’m wearin’ are clingin’ ta my sexy chassis. But now, that phantom ain’t chasin’ Harpy no more.
I wanna play with tha phantom again, but I just hafta be out here now.
“Let me out! Goddamn you, Harpy! LET ME OUT!”
“Ain’t happenin’, Bethy,” I say. “It’s Harpy’s body now. And . . . it’s Harpy’s world ta play in.”
“I know what happened now. You got out somehow and killed August and Dorothy Grimm! I know you did!”
I sigh. “Ya know, Bethy. As much as I wanna stay out here an be free, I think I’m gonna give ya control back afta all. Ya smart, so I know you’ll learn tha truth.” I’m mad now. “Neva point ya fingas at Harpy unless ya can back it up, Bethy!”