Terrifying & True | The Story of Krampus - He's NOT Santa Claus! 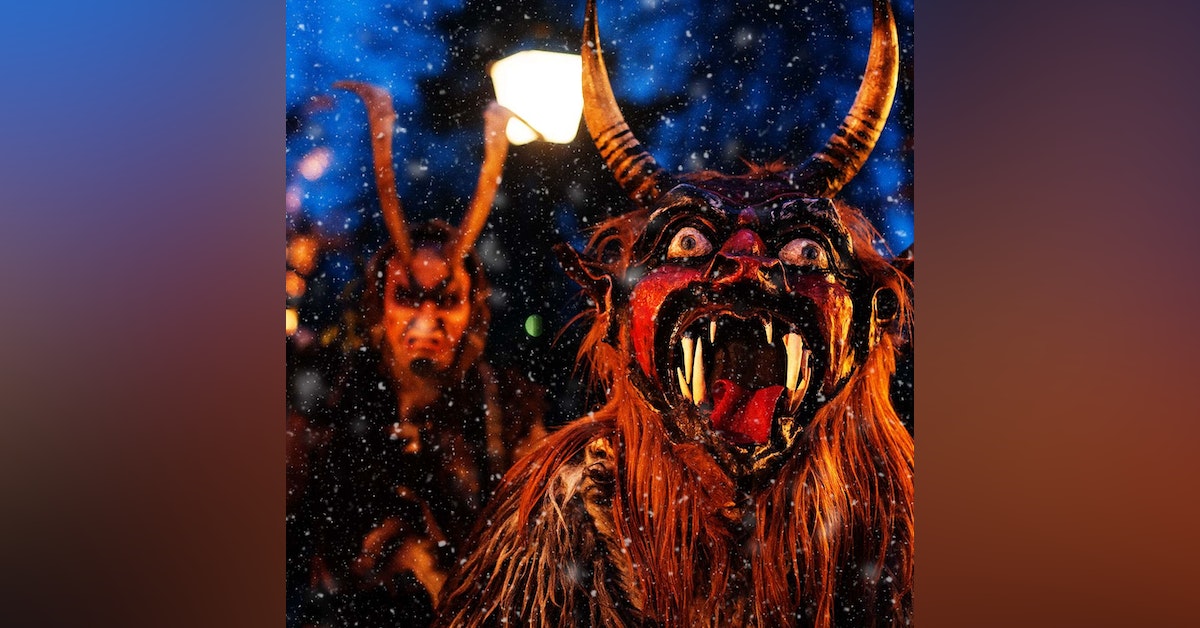 Santa Claus comes to your home ready to reward you for being good all year... But the creature that comes to punish those who have been bad isn't fat and jolly... He's not even a man! Krampus, the Christmas Demon, is coming!

We are telling that...

Santa Claus comes to your home ready to reward you for being good all year... But the creature that comes to punish those who have been bad isn't fat and jolly... He's not even a man! Krampus, the Christmas Demon, is coming!

We are telling that story today, on Terrifying & True

Christmas is the season of greetings, blessings, and that all good things go to those who wait. Be nice to others and do good around the year, then Santa brings gifts and joy but if you have been a bad kid, if you were naughty all year, get ready for season’s beatings by the anti Santa, Krampus.

A half man Half Goat, considered the son of the Norse god of the underworld, legend has it, Krampus punishes naughty people and even drags them to hell. If you haven’t heard or experienced the wrath of Krampus, consider yourself lucky however you might ask, who is it?

This man and animal hybrid comes around every year to chase naughty children and maybe even drag them to hell. European versions of St. Nicholas have long had scary counterparts like Belsnickle and Knecht Ruprecht who dole out punishment. Krampus is one such character who comes from folklore in Austria’s Alpine region, where he’s been frightening children and amusing adults for hundreds of years.

The history of the Krampus figure has been theorized as stretching back to pre-Christian Alpine traditions, with celebrations involving Krampus dating back to the 6th or 7th century CE. Though there are no written sources before the end of the 16th century. The terror of Krampus was put on hold during the aftermath of the 1932 election in Austria. The Krampus tradition was prohibited by the Dollfuss regime under the Clerical Fascist Fatherland's Front (Vaterländische Front) and the Christian Social Party. In the 1950s, the government distributed pamphlets titled "Krampus Is an Evil Man". Towards the end of the century, a popular resurgence of Krampus celebrations occurred and continues today. The Krampus tradition is being revived in Bavaria as well, along with a local artistic tradition of hand-carved wooden masks. In 2019 there were reports of drunken or disorderly conduct by masked Krampuses in some Austrian towns.

Although Krampus appears in many variations, most share some common physical characteristics. He is hairy, usually brown or black, and has the cloven hooves and horns of a goat. His long, pointed tongue lolls out, and he has fangs. Krampus carries chains, thought to symbolize the binding of the Devil by the Christian Church. He thrashes the chains for dramatic effect. The chains are sometimes accompanied with bells of various sizes. Of more pagan origins is the Rute, a bundle of birch branches that Krampus carries and with which he occasionally swats children. The Rute may have had significance in pre-Christian pagan initiation rites. The birch branches are replaced with a whip in some representations. Sometimes Krampus appears with a sack or a basket strapped to his back; this is to cart off evil children for drowning, eating, or transporting them to Hell. Some of the older versions make mention of naughty children being put in the bag and taken away.

Though descriptions of Krampus’ appearance vary from region to region, some things remain consistent: He is said to have pointed devilish horns and a long snake-like tongue. His body is covered in coarse fur, and he looks like a goat crossed with a demon. His body and arms are strung with chains and bells, and he carries a large sack or basket on his back to cart off evil children.

Krampus comes to town the night before the Feast of Saint Nicholas and visits all the houses to dish out his punishments. If you’re lucky, you might just get swatted with a birch branch. If you’re not, you’ll wind up in the sack. After that, your fate is anyone’s guess. Sometimes Krampus is accompanied by Saint Nicholas, who isn’t known to bother himself with naughty children in Central Europe. Instead, he focuses on handing out presents to well-behaved kids and then leaves the rest up to his sinister counterpart.

No one knows how Krampus became popular around the holidays in Austria,  Bavaria, the Czech Republic, and Slovenia but some believe that Krampus originally hails from the Alpine region’s pagan past. His name comes from the German word krampen, which means claws. It’s a compelling theory, especially since Krampus’ appearance coincides with a number of pagan winter rites, most notably one that sends people parading through the streets to disperse the ghosts of winter.

Over the years, as Christianity gained popularity in the region, aspects of Krampus’ appearance began to shift to fall in line with Christian beliefs.

It isn’t hard to see how Krampus, already associated with the winter festivities, might then have been incorporated into Christian traditions and the legend of Saint Nicholas around Christmastime.

Today, Krampus has his own celebration on the day before the Feast of Saint Nicholas in the Alpine region.

Every evening on December 5th, on a night called “Krampusnacht,” elegantly dressed Saint Nicks pair up with monstrously outfitted Krampuses and make the rounds to homes and businesses, offering gifts and playful threats. Some people exchange Krampusnacht greeting cards that depict the horned beast alongside festive and funny messages.

Sometimes, large groups of people dress up as Krampus and run amok throughout the streets, chasing friends and passersby with birch sticks. This activity is especially popular among young men.

Tourists who’ve witnessed this rowdy celebration say that running into a coffee shop won’t save you from getting swatted. And the swats aren’t exactly gentle. But luckily, they’re usually confined to the legs, and the festive atmosphere often makes up for the occasional welt. The tradition has become an important one in many countries and has come to include expensive handmade masks, elaborate costumes, and even parades. Though some complain that the celebration is becoming too commercialized, many aspects of the old festival endure. Krampus masks, for example, are typically carved from wood, and they are the products of significant labor. Artisans often work for months on the costumes, which sometimes end up on display in museums as examples of a living tradition of folk art.

In this day and age it is quite remarkable that ancient traditions have made it thus far but the legend of Krampus has had an especially rough fight for survival. Austria’s ban on Krampus nearly ended the fantastical figure entirely. Though they may have had a point about the traumatic effects of telling misbehaving children that they were going to be eaten by Saint Nick’s evil twin, society wasn’t deeply moved. The ban lasted for only about four years, and vague murmurs of disapproval continued only a little while longer. But in the end, no one could keep Krampus down.

By the end of 20th century Krampus was back in full force and in recent years, he’s made the leap across the pond to the United States. He’s had cameos on many TV shows, including Grimm, Supernatural, and The Colbert Report, to name a few.

December 5th is the day this demon is allowed to roam the streets and villages, it was no

longer st. Nicholas who would give you a twig or a lump of coal he was only concerned with the good children, the punishment of the rest fell to Krampus it was fairly common for the church to integrate ideas and traditions from other cultures into their own when attempting to convert those from a different faith and it does make sense just turning up on someone's doorstep and telling them to stop believing in what they do because they would go to hell, normally elicits a negative reaction. It’s better to show them that there is a common ground in your beliefs and is much more effective.

In this case it was more so the Austrian people who adapted their beliefs into something more palatable to the church and so the story of St. Nicholas and Krampus is a good example of how a heathen belief was integrated. The tradition of St. Nicholas Day went through quite a major shift . As a result of going from Saint Nicholas giving you a twig if you were poorly behaved to being dragged off to hell by a giant demon goat monster but if you were lucky maybe you'd just be eaten or drowned in the lake, it was quite the tonal shift and by the 16th century stories of Saint Nicholas began to be replaced and he became Santa Claus deriving from his Dutch name Sinterklaas or Father Christmas.

If you live in the UK, stories of Krampus remain largely the same and December 5th is still considered a Krampus night in many countries. With Christmas being celebrated on the 25th it's only natural to then want to move Krampus night to Christmas Eve for those outside of the alpine region and that's why you may see this in various stories and movies despite these celebrations and festivals taking place in early December.

These celebrations can vary depending on the region, they often involve dressing up in fur and attempting to look as terrifying as possible. In some towns it's more humorous and in others it's more scary but it's all mostly done in good fun.

In parts of Austria twigs will be painted gold and left around the house all year round as a reminder for children to behave. In the 1800's Krampus could be found on greeting cards, post cards and on the wrappers of candy. These depictions were rather odd and often quite distasteful as they feature Krampus with a more devilish figure. This stems from those in large cities never really having seen these traditions so all they had to go by was the word of the church who equated Krampus to the devil.

In terms of his story these images do make sense but it's not hard to imagine why some wouldn't find them suitable. It’s also why over the years they've gone from frightening to more comical in order to appeal to a larger audience.

What's nice to see is that these festivals still take place today and not just in towns and cities within Austria and Germany but all around the world even popping up in parts of North America.

There’s no doubt that stories of Krampus and those predating him have a dark tone to them but to say that he's just evil doesn't really tell the whole story. Before they were Christianized the Parkton served as protective spirits and Krampus only really came to as St. Nicholas's companion as a way to keep these traditions alive. Even then he merely punishes those who were deemed as deserving. He doesn't commit acts of evil against the innocent and therefore he can be seen as representing a necessary evil. For many this whole spectacle was and still is a time of fun and expression even today families take their children to these events and festivals to them Krampus is more of a Disney villain than a terrifying demonic story.