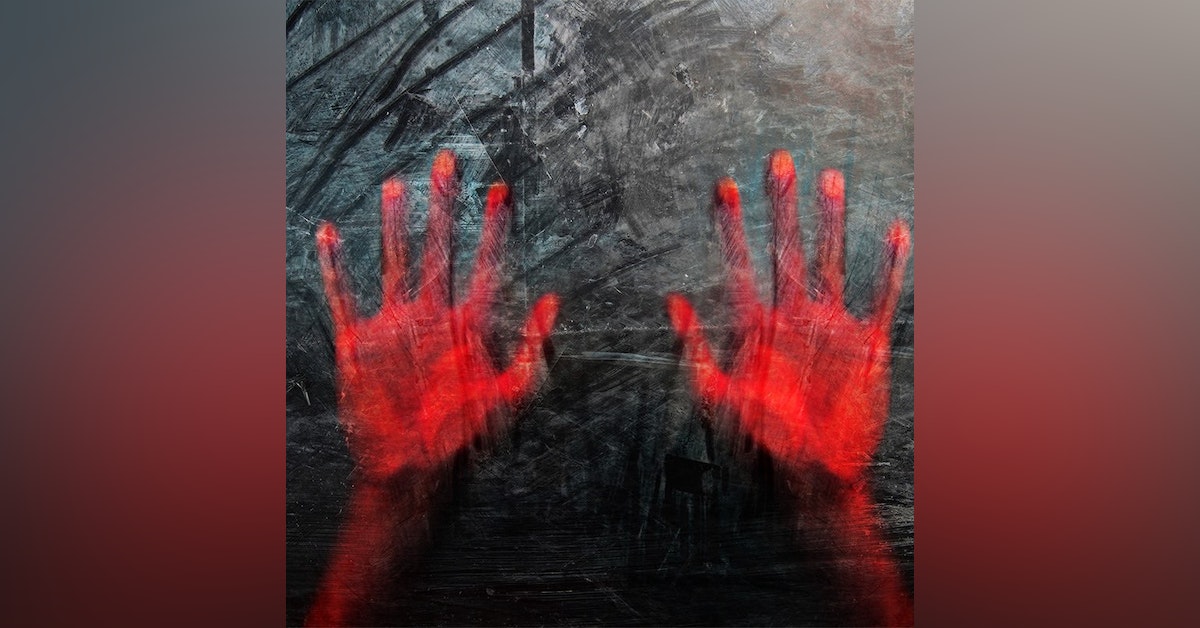 In a mysterious dark room covered in broken glass Alicia is about to learn that terror can come in small packages...

<pre> Alicia lay in the dark, someplace warm and damp. She felt heavy, almost like being underwater. Her movement was slow, the resistance in the air around her making her feel tired. She looked around at her surroundings. Strange shapes were barely visible in the dark jutted at bizarre angles. What were they? Where was she? The last thing she remembered was getting ready for bed. Brushing her teeth and changing into her comfy yellow pajamas she had since she was fifteen. Was this some kind of alien abduction? She half joked to herself. </pre>

“Hello?” she called out into the space around here, becoming aware at how total the silence was until she spoke. A few seconds passed and she felt her heart start to race. She was alone. A dread came over her as the hairs on the back of her neck stood at attention.

<pre> “No words for your daughter, mother?” the fetus said as it crawled closer to the table. Alicia had to peer straight over the edge to see it. She was so glad she was on top of the table, a safe place from the monster below. “I…don’t have a daughter,” Alicia managed to spit out between short, scared breaths. A flash of lightning illuminated the room. “Then what am I, mother?” The fetus asked and sat up crossing its legs. “Am I not real?” </pre>

A flash of light lit up the fetus’s face. “Oh no? Do I not bleed?” The fetus said gesturing around with its chubby arms at the floor around it. “Oh wait. This is mostly your blood. Even though when you shed it it was both of ours,” the fetus explained rubbing the blood into its skin. It sighed at her and picked up a piece of broken glass in its tiny hand. Its eyes met hers as it ran the glass across its wrist. Blood poured out of the wound. “There we go,” it said and giggled in a baby’s voice. “I do have my own.”

“What the hell are you?” Alicia yelled out sitting up on the table to get farther away from the monstrosity below.

<pre> “I thought it was obvious,” the fetus said raising its self to its feet in the light of a strike. It started to swing the umbilical cord around. With each revolution it grew a few inches. After a couple seconds the fetus let go of the cord and the end shot out above Alicia in the darkness. She heard a wet slap above her. Another flash of lightning showed her a hospital light above her. The cord wrapping around the handle reminded her of Indiana Jones’s whip. She turned back towards the fetus but almost fell of the table in recoiled fear. It was now on the table with her. The storm outside intensified, flashes were coming almost regularly now. It was a strobe light at a party, and just as noisy with the thunder. Still, she had no problem hearing the fetus speak. “No hug for your daughter? You are not a very good mother, mother,” the fetus said and took a tiny foot step towards her. A bloody footprint was left on the stainless-steel table. “Stay where you are!” Alicia yelled out, a crack of thunder added punctuation to her angry demand. “But mother, I am hungry, the fetus said and smiled a smile of wicked teeth, jagged and black. She followed the fetus’s gaze until she realized it was looking at her chest. “No,” she whispered, her voice cracking in fear. “Am I to starve now?” The fetus asked, taking another step closer. “It wasn’t bad enough you tore me out, but you want to watch me wither away and die? Did I do something awful to you in a past life, mother?” A surge of adrenaline flowed through Alicia and she kicked out sending the fetus flying into the darkness. She heard the thud as it landed somewhere near the bed she woke on. Then she heard a laugh. It was so much like her own laugh. She lost sight on the fetus in the shadows of the room. “Stay away from me!” She yelled out and used the next flash to find the door. She raced off the table towards it. She heard feet slapping on broken glass and tile, and when she reached the handle, she grabbed the soft bloody torso of the fetus. She felt the umbilical cord in her hand, like cold, wet penne pasta. “A mother’s touch,” The fetus said with a sarcastic sneer. “I expected it to be warmer. Tell me mother, why did you remove me from the oven. I wasn’t done cooking yet.” “I didn’t do this!” She yelled. “Well it certainly wasn’t me; I was floating around having a great dream. Then I was awoken when you yanked me out!” The fetus finished with a yell and bit her hand. She drew it back but the fetus clutched on and jumped up her arm. She grabbed the door and yanked it open, hoping for help, for a savior, but there was just more darkness. The hall she imagined to be full of people, doctors and nurses helping people was only a dark tunnel. “Feed me mother, I hunger!” It said and stabbed into her breast with the piece of broken glass. She screamed out in pain and blood began to run down her chest. </pre>

“Alicia,” a voice called out. She didn’t recognize it. “Alicia, your surgery was a success, wake up now.”

Alicia opened her eyes and the darkness left. She looked into the face of a nurse over her bed. “Your Hysterectomy was a success. How do you feel?” She reached her hands down to her stomach and felt pain.

“We had to remove the uterus through an incision. Your small frame made it impossible to come out your vagina. You will be sore for a while, but you will be fine. I think we minimized any change of scaring,” the nurse said with a smile.

Alicia started to laugh. Each spasm sent pain racing through her. It was just an anesthesia dream, she was fine. The fetus was just her imagination. She sighed with relief and ran her fingers through her hair. Her hand fell to her breast. She peaked under her hospital gown. There was a cut across her breast. She looked back up at the nurse, but she was alone in the room. She turned her attention to the door, and watched it as it slowly closed, cutting out the light. Then she heard the shuffling on the floor…

This podcast is powered by Pinecast.