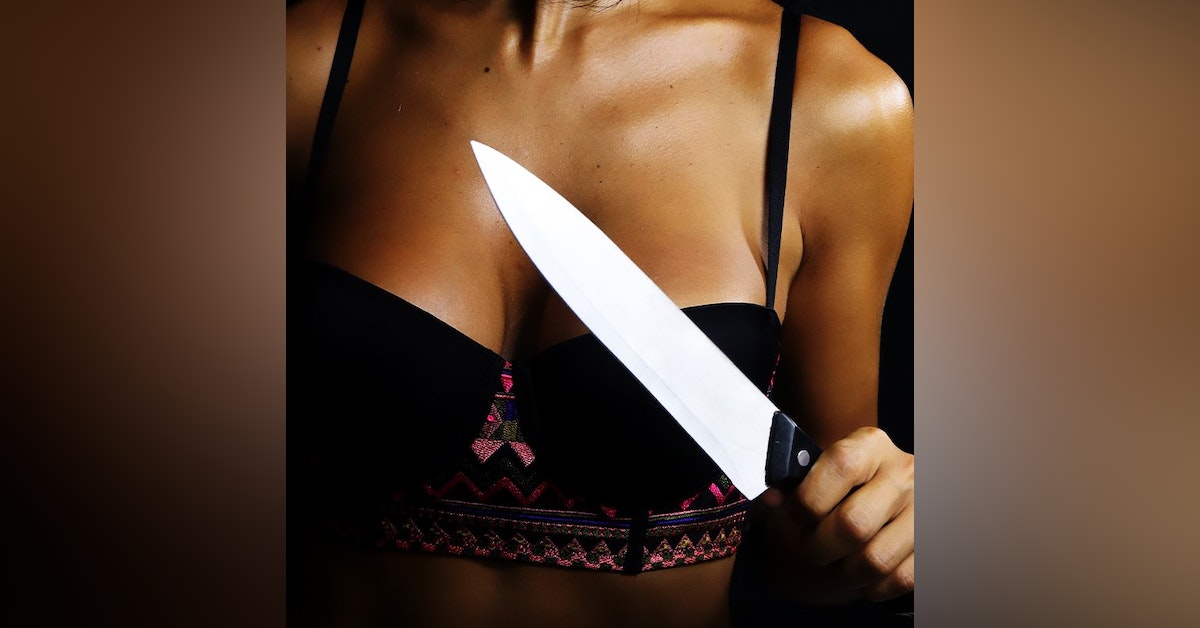 The so called "Angel of Death" has been killing lots of criminals in Strickfield, but how did she start and who can possibly catch her?!

Drake Kazmierczak had been on the road for a few hours. He had packed up and left his job as a detective at the Erie City Police Department. He was on his way to Strickfield to take an opening for a detective within their police department. Although Drake’s uncle, Jeffrey, was the chief of police, he didn’t actually take the job to be closer to his uncle – and Drake was very close to Uncle Jeffrey. No, he had a pretty good idea that a certain Angel of Death was currently residing in Strickfield; his months of research had told him that it was a good eighty-seven percent certainty.  Drake tightened his grip on the steering wheel as he wondered how many guilty people the Angel of Death had taken. He knew it was many hundreds! It angered Drake every time the Angel of Death made the news. However, it never really got to him until the day he picked up a copy of the North Ridgeway Press and read about how the Angel of Death had claimed Annie Judge.  Drake had known that Annie Judge was not a perfect woman by any stretch, but Annie was the love of his life. The two of them had shared so much in the many years that they were together. He came to know that Annie was carefree and uninhibited, qualities that he loved about her. However, when Drake had accepted his badge, he had accepted the law. It was this, along with what he had discovered about Annie’s darker tastes that would permanently drive a wedge between the two of them.  And then he recalled the events that he had read about in the newspaper . . .

Raigen Devereux walked into North Ridgeway High School. She walked into first period and took her usual seat.  “Hey, Raige, you gonna show us your tits after we win the game tonight?” Jagger Nelson called out to her.  Raigen turned to see the sneers of Jagger and the other football players. She responded by raising her middle finger. “You can’t even catch a football, Jagger. What makes you think you can handle my tits?” The other girls in the class cheered for this witty cheerleader.  Just then, Raigen turned and gave her full attention to Annie Judge as she entered the classroom. She had been teaching many of the A.P. math subjects for the last several years. She almost always wore the same outfits: a blouse, a long skirt or pants, and loafers. Her face was a perfect oval with long blond hair and blue eyes. She always wore blush and matching lipstick. It was easy to see why guys appreciated her, even at thirty-six years old.  Raigen came to know that she made damn good money, not referring to just her teacher’s salary. Raigen knew that Annie had a second life as a self-employed prostitute and drug pusher. But she didn’t go to other cities to sell her body. No, she sold her body to students at North Ridgeway High School, ones who could afford to pay her prices for fucking them, or students she desired to prey upon – legal age or not.  Raigen came to know this information for two reasons. One, Miss Judge lived two blocks down the street from Raigen. Two, a month ago, Raigen saw a police car parked in Annie’s driveway, flashers on. Raigen couldn’t listen to the conversation, but her mother was a detective on the police force and was there that night. Raigen’s mother usually told her about what was going on in the privacy of their home, because she knew her daughter always kept her mouth shut. Raigen learned about the anonymous tip about the drug activity that was taking place at Annie Judge’s house. Nothing was found, however, in spite of the search warrant. It seemed that Annie Judge was always steps ahead of the police.  Two weeks later, Raigen was out walking and had seen a police car at Annie Judge’s house again. Again, Raigen’s mother was on the scene. Raigen would later learn that Michelle Bailey, at fellow student at her high school, had recently gone missing. After Raigen’s mother had questioned several students, a few of them said Miss Judge__ was the last one to talk to her. In fact, the two of them seemed to be really close by the end of the last school year. It was then Raigen’s mother had told her that Michelle’s parents had filed a missing person’s report that Annie Judge would become Raigen’s top priority. Raigen’s mother had told her about the last night that Michelle Bailey was seen. It was at Skate World where Raigen’s mother had been told Michelle was picked up by a woman matching Annie Judge’s description, in a green Ford Fusion. Raigen knew that Miss Judge had such a car.  Since Raigen had access to her mother’s computer, she was able to look into Annie Judge’s record, but she found no priors. Raigen knew that the police couldn’t keep detail on Miss Judge, because who was to say that she might not file a harassment lawsuit against them. No, Raigen would have to take matters into her own hands.  This was a job for the Angel of Death!

Raigen was sitting on Annie’s steps to her side garage entrance when she pulled in. The garage door came down as soon as the car stopped. Annie got out of the car. “How did you end up in my garage, Raigen?”  Raigen pointed to the back doorway. “Unlocked.”  Annie unlocked the side door and opened it. When they were in, Annie closed the door and put her purse down. She snatched Raigen into her arms and gave her a long, lustful kiss. When it was finished, Raigen stepped back to catch her breath.  “You left me before, you naughty girl,” Annie purred.  Raigen pecked her lips. “Do you have any more of that iced tea? I’d like some before we fuck.” Annie laughed a little and walked to the refrigerator to get the pitcher of iced tea. She filled two glasses and handed Raigen one.  “I can’t stop thinking about you, Miss Judge,” Raigen said, in a lustful tone.  “I’ll teach you so much, honey.” Annie drank her tea.  Raigen took a little bit of iced tea into her mouth. When Annie had finished hers, Raigen spit the tea in her mouth back into the glass and put it down.  “Aren’t you going to . . . to drink your . . .” Annie slumped to the floor and was sleeping peacefully.

Drake groaned as he realized he was now entering the village of Strickfield. He was still grief-stricken at what had happened to Annie Judge. Why, Annie? Where did you go wrong? Why couldn’t we have been happy? Then he focused on the Angel of Death. You had no right! NO RIGHT!! I know you’re here – in Strickfield! One way or another . . . I WILL FIND YOU AND PUT YOU AWAY!! That’s a fucking PROMISE!! Drake finally pulled in at the Strickfield Police Department and got out. He went inside to find his uncle waiting for him. “Drake . . . I was wondering when you’d finally roll in.” Drake smiled. “Uncle Jeffrey! Yeah, I just got here.” The two of them shared a brief hug. Then Jeffrey took Drake to his office and told him to have a seat.  “You settled here in Strickfield yet?” Jeffrey asked.  “I will. My apartment’s ready,” Drake confirmed. “I just have to get used to living here. My apartment’s near Strickfield University.” Jeffrey nodded. “You going to be okay with taking this job?” “You bet I am!” Drake declared. “I’m going to find the Angel of Death – and expose him!” Jeffrey sighed. “Drake . . . just one word of advice regarding the Angel of Death. Nobody, I mean nobody, talks about the Angel of Death here. We just don’t. Plain and simple. Now don’t go sticking your nose where it don’t belong. I offered you my open detective position because of your outstanding record when you worked in Erie City. You’re one of the two best detectives I know. Don’t make me regret bringing you on here.” Drake was irate. “Uncle Jeffrey, don’t you understand? The Angel of Death is a murderer! He’s literally taking the law into his own hands when he kills all these people.” Uncle Jeffrey shook his head. “Not people, Drake . . . criminals! Ones that the courts won’t touch. The Angel of Death is doing what we who are sworn to uphold the law can’t do.” Before Drake could further protest, Jeffrey raised his hand. “I don’t want to discuss the Angel of Death any further. Like I said, we simply do not talk about the Angel of Death here. That means you don’t either.” Just then, there was a knocking at the door. Chief Kazmierczak motioned for the girl to come in.  “You sent for me, Chief?” the girl asked.  “Drake, I would like you to meet Raige Devereux. She’s our college intern that I was telling you about. She’s also the other best detective that I know. Damn sharp mind on this one, much like you. She’s helped us solve all our toughest cases.” Then he looked her way, “Raige, this is my nephew, Detective Drake Kazmierczak. I’m going to stick you with him and let him shadow you from now on. I think the two of you will work very well together.” Drake barely heard a word of what Uncle Jeffrey had said to him. Once he had gazed upon this very beautiful angel, he was glad that he had come to Strickfield after all.