Ep.80 – Dead and Breakfast - Behind the Snowy Blizzard There's a MANIAC! 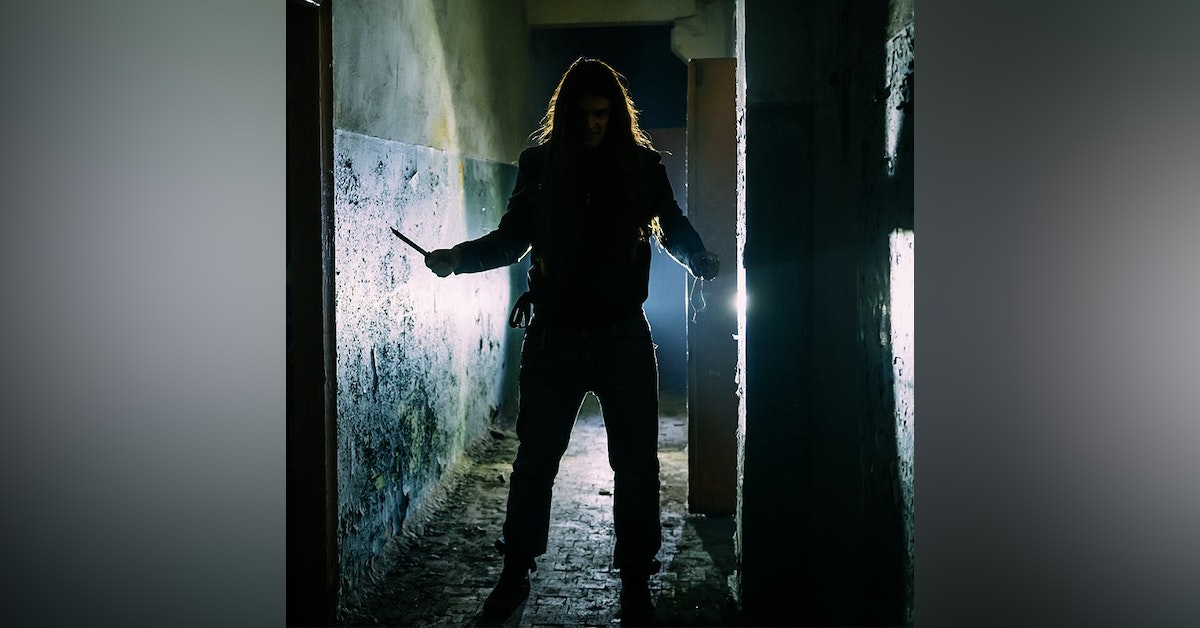 A group of teens get stranded by a severe blizzard, luckily they've landed on the doorstep of a humble Bed and Breakfast where they can get warm for the night... But something else is lurking in the white snow and it's dangerous.

Dead and Breakfast by Morgan Moore

The screams of a young woman pierced the night as the source of the din exploded from the backdoor of her home… letting loose another screech in her wake.

Her screaming didn’t last long as the cold night air cut off her wind, forcing her to stop to catch her breath.

She was enjoying a night to herself while her mother babysat for her… but the peace she was hoping to get was shattered when a stranger knocked on her door.

When she opened it, the man rushed her and chased her into the living room… a bottle to the head lead to her escape.

And here she was, taking a break to regain her composure.

She was freezing, but there was no way she was going back into her house. A neighbor… any neighbor would have to do.

The young woman started to walk towards a distant gate when the man shoved his foot into the small of her back.

With no time to react, he flipped her over, sitting knees first on her stomach.

Stunned by the blow she looked up at him, as the ice pick… recently pilfered from her home… entered and exited her heart repeatedly.

When he was finished the man stood up and slid the ice pick into the pocket of his jacket before walking off into the cold, bitter night.

Rachel, Matt, and their friends Danni and Jack had been trying to get in one last camping trip before the weather turned bitter… but a blizzard appeared out of nowhere mid-week, so the quartet had packed up and hit the highway.

The blizzard in full swing, the group took the recommended detours and ended up in a town called Oldsville… or more accurately on the front lawn of a house they almost hit as they skidded off the road thanks to the ice surrounding Oldsville.

“So now what do we do?” Danni asked as she held her arms against her body for extra warmth.

“There’s no way we’re gonna get any help out here tonight.” Jack remarked.

“Well we have to do something or else we’ll freeze.“ Matt interjected.

Rachel looked around the area. He was right she thought; they’d freeze to death if they stayed out here.

Rachel looked around the neighborhood, and noticed that the lights were off in every house except for the one they were stuck in front of. “Hey guys, it looks like the people who live here might still be up. Why don’t try asking them for help?” she suggested to her friends.

The other three looked at each other and shrugged.

“I’m game… as long as they have heat.” Danni said.

“And a warm bed to go with it.” Jack added, grabbing Danni by the waist and bringing her into a kiss.

“Don’t get too lovey-dovey, you might get stuck together, and not in a fun way.” Matt said as he hauled out everybody’s bags from the car.

The four trudged up to the house and banged on the door all at once.

Almost immediately the door swung open. A middle aged woman stood between them and the interior.

“Hi. We’re sorry to bother you. But we slid off the road and uh, into your yard…” Matt started gesturing to the car. “...anyways it’s stuck now. Is there any way you could let us spend the night?” he finished before giving the woman a warm smile, the others following suit.

The woman looked at the group and shrugged a bit. “Well, I guess we’d be a really terrible bed and breakfast if I didn’t let you sleep here. Come on in.”

She ushered them inside.

“A bed and breakfast? I guess we lucked out big time. I didn’t see a sign out in the yard though.” Rachel remarked as she and her friends stripped off their winter gear.

“It’s more than likely covered by all the snow.” The caretaker explained.

She lead the group to the kitchen and after a few minutes handed them each a hot cup of tea.

The foursome downed their beverages eagerly which elicited a chuckle from the caretaker.

“Are there any other guests staying here?” Danni asked.

“Nope. You kids are probably the only ones we’ll have until the weather blows over.”

“How much do we owe you?” Jack asked.

“Don’t worry about it tonight. We can hash that out in the morning… no point in handling the business side of this now when you may end up staying longer.”

The group looked at each other sheepishly.

“Sounds like a plan then.” Matt said, breaking the awkward silence. “I don’t know about you guys, but I’m tired. Would you excuse us ma’am?”

“Not at all. The rooms are upstairs for guests, pick whatever ones you want. My room is down here if you kids need anything.” She explained, giving them a smile.

The stranger trudged through the harsh winter conditions. He did not know where he was going… he was only moving because he felt the urge to do so.

He would need shelter soon.

As if reading his mind the snow let up some… the lights of the nearby house beckoning him.

Rachel walked into the room she and Matt had claimed, buttoning up a pajama shirt as she did so. Matt sat on the bed looking at his phone.

“I was checking the weather. Looks like the snow is definitely not stopping until late tomorrow night.”

“I guess that means we will be staying here for a bit.” Rachel said, blowing a strand of hair from her face.

The stranger pried open the backdoor of the dwelling and slipped inside.

Finding himself in a kitchen, he sat down at a table and pulled off his coat.

He removed an ice-pick from his pocket, laid it upon the table and sighed at the sight of the instrument before him.

Danni collapsed onto Jack and smiled before rolling off of him. The two lovers lied next to each other, sweat covering them.

Jack dozed off seconds later, only to come to in pitch blackness.

He stumbled to his feet in search of his phone, and the light it would provide.

The stranger rushed at Jack and pinned him against the wall.

The blows came fast, tearing his flesh savagely again and again! The stranger let Jack’s body collapse to the floor before heading to the bathroom and the sound of running water…

Matt and Rachel rushed into the bathroom as Danni’s screams rang out repeatedly.

Now here they were, face to face with a psychopath.

“Run!” Matt screamed as the stranger bolted towards them.

The duo rushed down the stairs, nearly falling over one another as the stranger pursued them.

Their eyes went to the front door, widening in joy that they would be free of this nightmare.

Matt turned his head to look at her as the stranger slit his throat.

The killer stood up and turned to face Rachel.

She bolted and dove out window in the far side of the room and ran pell-mell into the cold night.

The frigid air assaulted her lungs and skin.

Rachel pressed on, desperately searching for signs of life in any of the neighboring houses.

Minutes passed and she was ready to give up when a light appeared from a distant home.

She stumbled forth, up the stairs, and beat on the door until her knuckles bled.

The door opened a crack and a middle aged woman peered forth from the slight opening.

The woman looked at Rachel, stunned. She gathered her wits and spoke.

“Somebody is chasing me! He killed my friends!”

The woman ushered Rachel inside and bolted the door.

“That’s my husband. Let me go tell him what happened to you.” the woman said as she left the room, wringing her hands.

Rachel listened to the sound of a clock ticking away in the kitchen.

In the doorway stood the stranger, ice-pick in hand.

His lips split into a gruesome smile.

Rachel’s bloodcurdling scream rung through the neighborhood and across the cold Winter’s night.