Ep.68 – Careful What You Wish - Only Death Comes From This Genie 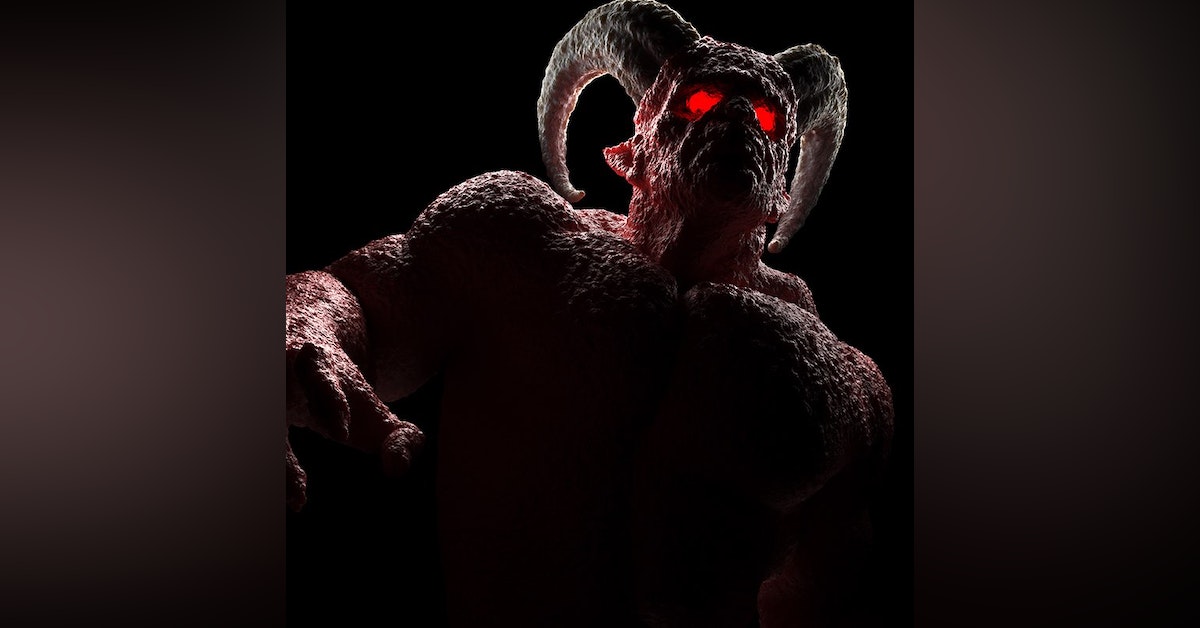 Penn and Ed are an unlikely pair who encounter and ancient evil from the deserts of the middle east, how can they stop something with the limitless power to grant any wish?!

Careful What You Wish by David O'Hanlon

Penn reached for the doorbell. His finger hovered over the button as it had the last two times he tried to bring himself to ring. He sighed and jabbed the button. Ed’s face pressed against the glass of the nearest window. Penn chuckled at the sight of the freckled, buck-tooth face smiling excitedly at him. The door opened and Penn was greeted by a far-less enthusiastic individual.  Penn shifted uncomfortably. He didn’t look like an ex-con in his new jeans and custom polo shirt, but he felt the same way he did every time he was pulled in for a police lineup. Ed’s mother, Janet, held an obese chocolate-point Siamese cat against her chest and stroked it like a movie villain while she eyed the man on her doorstep. Janet slipped her robe up over her shoulder and raised an eyebrow.  “You’re Ed’s friend?” Penn shifted the brown paper bag into his left hand and extended the right. “Yes, ma’am. I’m Penn.” “Been in a few too would be my guess.” She waved him inside. “You’re going to let the other cats out.” Penn stepped inside and glanced around the restored Brownstone. Three tabbies lounged on the furniture. A Maine Coon lifted its head from the arm of the recliner to survey the new arrival to its domain. The cat was seemingly unimpressed by Penn and went back to sleep.  Penn turned to Janet. Ed had told him his mom used to be a famous model, but the horrible marriage and subsequent vodka-and-valium-based diet hid the fact now. Janet looked like she should be bumming smokes outside a 7-Eleven. Penn felt a tinge of guilt. He knew better than anyone not to judge a person by their circumstances. She dumped the Siamese onto the loveseat and straightened her pajamas before pulling her robe closed and tying the belt tightly around her slender waist. “Don’t you think it’s weird hanging out with a ten-year-old boy?” Janet snapped the elastic from her bun and let her brown hair fall as she walked past him and into the kitchen. She grabbed a glass from the dish strainer and banged it onto the countertop. “You’re like thirty, after all.” Penn shrugged. “So are you.” “Thanks for rubbing salt in that wound.” Janet poured orange juice into a glass and reached for the Popov bottle atop the fridge. “You can have something to drink if you like. Lactose-free milk, sugar-free Kool-Aid, caffeine-free tea. We even have the shitty soda that lacks all of the above.” “I’ve got a water bottle in the truck, but thanks.” “Cut the shit, Penn.” Janet sipped from the bottle before pouring a splash into the juice. “The boy’s allergic to everything. No one hangs out with him because they want to. The last date I had was four years ago and Ed broke out in hives because of the guy’s cologne. He has to wear a dust mask to walk through the living room because of the cat hair. The inhaler, the EpiPen, anxiety meds, and Allegra for sinuses. Seizures at the movies, motion sickness at the fair, panic attacks at the mall. There’s nothing you can do with him. Ed shouldn’t even go to the park, or wherever it is that he spends his time. What do you really want with him?”  Ed sneezed around a corner. Penn wasn’t sure where the boy was, but knew he was within earshot. Janet’s eyes flicked toward the noise and back to Penn. Calling her son a loser clearly wasn’t outside the norm. Penn’s fist tightened, crumpling the paper sack noisily.  “Healthwise, there’s a lot of things wrong with Ed. Everyone else sees those conditions as things that make him weak. I see them as the reasons he’s got such a big goddamn heart.” Penn stepped closer to Janet and took the glass from counter before she could drink it. “They’re Ed’s conditions, but you’re right, they do interfere with your life. You have to take the extra precautions and I bet that’s exhausting.” “Don’t you patronize me!” “I’m not. Honestly. I can’t imagine what you’ve had to sacrifice to protect him, but that doesn’t change the fact that Ed doesn’t get to be a kid.” Penn chugged the screwdriver and scowled at the aftertaste. He cleared his throat. “What I want is take him for the weekend so he can experience a sleepover, watch cheesy horror flicks, play too many video games, and eat a fuck-ton of red-and-green gummi worms with his friend the way regular kids get to. And you can go to the spa, or the mall, or a date, or at least to a liquor store with better vodka.” “You are one ballsy sonofabitch.” Janet huffed and put her hands on her hips.  “Thank you for noticing, but let’s keep this professional.” Janet’s face slipped into a smile for a brief moment, then the serious, judgmental glare returned.  “You want to know what’s in it for me?” Penn shrugged. “Ed’s the only person that’s ever seen anything good in me. I want to return the favor. I want to give him the experiences he should be having and as an extra bonus, I’m giving you the weekend off.” “He’s got school Monday.” Janet took the glass from Penn and jabbed the rim into his chest. “You have him home by seven Sunday night or you’ll be the one with medical conditions.” “Whoo-hoo!” Ed shouted from around the corner.

Ed climbed into the unmarked moving truck and clicked his seatbelt. Penn handed him the brown paper bag. “I don’t think your mom likes me,” he said. “To be fair, mom doesn’t get enough guests to know how to like people.” Ed uncurled the lip of the bag. “What’s this?” “A present, obviously.” “Presents don’t usually come in brown grocery bags, Penn.” Ed giggled and pulled out a black polo shirt. “Hey! It’s like yours.” “Exactly like mine,” Penn said as he tapped his own embroidered pocket. Ed found the chest pocket was identical and featured a stitched moving truck in green thread and gold letters surrounded it—Ed and Penn Moving Services. Ed reached into the bag once more and pulled out a lunchbox. He opened it and found a bag of gummi worms, a sandwich, two juice boxes, and a protein bar. Ed smiled sadly. “What’s wrong?” “I’m too weak to help you move things.” “People have little things to move.” Penn tussled Ed’s shaggy hair. “Besides, you don’t get stronger by not trying. I used to be scrawny.” “Really?” “Really. And look at me now.” Penn flexed, straining the sleeve of his shirt. “How do you think I got this strong?” “Because you had nothing to do but workout when you were in prison?” Ed answered chipperly.  “That’s entirely true, and also not my point.” Penn pursed his lips. “Even if you can’t help with the physical part all the time, I’m going to need someone to help with all the business stuff. They don’t teach book keeping in the joint. And you have to help me paint the truck.” Ed sat up quickly. “Any color?”  “Of course. Ready for our first job?” Penn held out his fist. Ed bumped his knuckles against Penn’s hand. “Absolutely, partner.”

Janet adjusted the flowers in their vases. Her hands shook as much from stress and heartache as from the lack of a drink. She hadn’t had a drop since Penn returned without her son. She wouldn’t touch it ever again. Ed only ever had one friend, but the flowers seemed to come from everywhere. Even some lady in New York sent some. It seemed all the time Janet spent in a bottle, her son spent touching the lives of others. None of them were his friends. Just Penn. The rest sent cards explaining how Ed helped them. How the words and smile he shared touched them. She reread the cards and broke down in tears again. Penn placed a hand on her shoulder. She slapped it away.  “I never knew what he was doing when I’d send him away,” she said, holding up the cards. Penn took them and flipped through the stack. He’d read all of them several times. “Ed told me magic is just a toy without a battery.” He set the cards next to the flowers and took a bag of gummi worms from his pocket. He’d picked all the other colors out to leave only Ed’s favorite red-and-green ones. He put one between his teeth and slurped it up before offering them to Janet. She smiled softly and plucked one from the bag. “What’s that even mean?” she asked. “Ed shared his magic with people that needed it. He got that from somewhere. Maybe you fucked up in how you showed it, but you still loved him or you wouldn’t be crying in a bag of gummi worms with me. That was the battery to his magic… love.” “They still don’t know what happened,” Janet said.  “Severe allergic reaction,” a small, Middle Eastern man said from behind oversized glasses. He stepped into the room and slapped the iPad against his palm. “Possibly something found in the secondhand moving blankets inside Mister Pennington’s truck.” “Pennington?” Janet glanced up at Penn.  Penn pointed at the man. “You’re the cook.” “Obviously not, since I am clearly the doctor.” He nodded happily. “And you are Casper Marion Pennington, are you not?” “Wow. Your parents hated you,” Janet said. “Yeah.” Penn pinched the bridge of his nose. “I am.” “You should be more careful of the things you allow a boy to play with,” the doctor scolded him. Ed turned away from the harsh glare of the overhead fluorescents with a groan. “Mom? Penn?” “About damn time you woke up, kid.” Penn rubbed Ed’s shaved head. “How are you feeling?” “Like I was in a car crash.” The doctor cleared his throat. Penn squinted at him then turned his attention back to Ed. Janet shoved him out of the way and snuggled her son. Penn sat on the corner of the bed and dug in his pocket with a groan. The skin grafts were tight and pinched. Ed pushed his mother’s hair out of his face. “Mom, you’re smothering me.” “I’m sorry, baby.” She kissed his cheek. “For so much.” Penn put his hand on her shoulder again and this time she let it stay. “Good thing you woke up when you did,” Penn said. “Why’s that?” Ed asked as excitedly as the recently resuscitated could. “Because you almost missed the coolest, most fun holiday there is.” He handed Ed a narrow box with a ribbon around it. Ed opened the box and smiled, holding up the prize inside. “I can’t believe I forgot.” “That’s right kid, it’s National Kazoo Day.” The End