Ep.36 – A Dog and His Boy - Ferocious Revenge from a Four Legged Maniac! 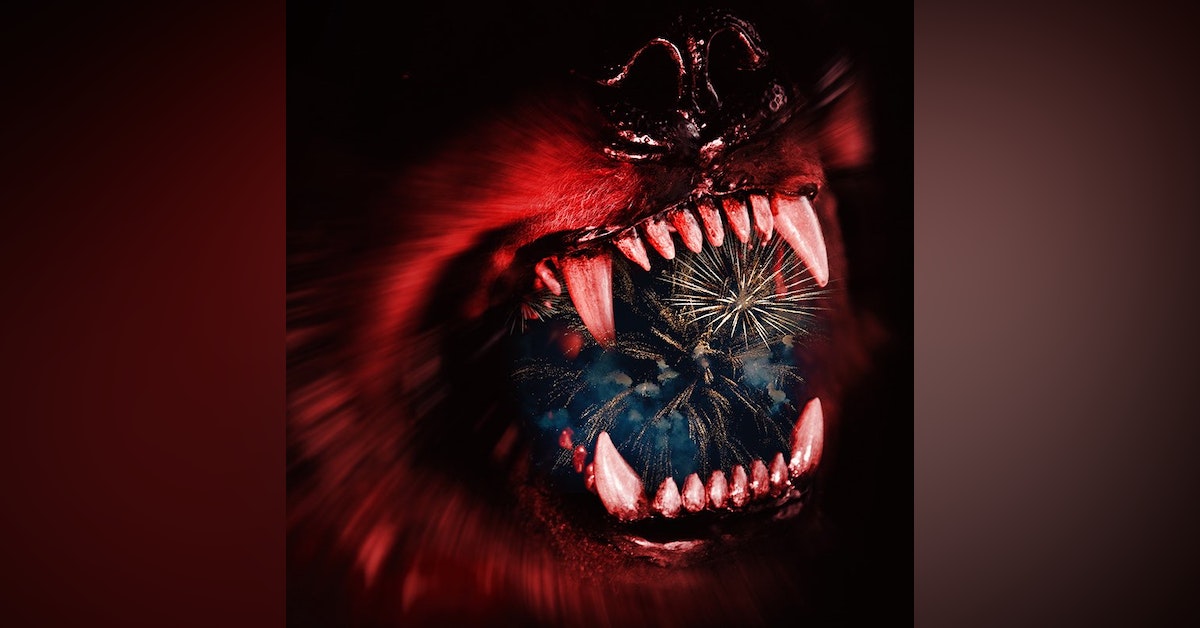 On the 4th of July one quirky canine has had enough of the dangerous fireworks display and now he's out for BLOOD.

A Dog and His Boy by David O'Hanlon

Rocko eyed the bags suspiciously as his boy brought them through the living room. He recognized the starburst logo of Discount Demolitions Firework Emporium and shivered slightly. This was his third Fourth of July since the adoption and he’d already decided where he would be cowering for most of the evening. When the big artillery shells went off, he would make his way to Ryan’s closet where he could burrow into the safety of all the extra blankets. Rocko laid his head on his paws and snorted. Stupid humans, Rocko thought. Just because you can’t bark, doesn’t mean you have to overcompensate with the big noise makers. We still love you even though you’re frail and feeble. Rocko climbed down from the couch and stretched away his morning nap in preparation of the coming game of fetch. Ryan always played fetch with him when he came home from school. Rocko wasn’t sure why his human enjoyed throwing a ball or stick so many times, but if it brought him joy, then Rocko would gladly oblige the simple creature. There were more pressing issues to attend to first, however. Rocko dragged his butt across the living room floor all the way to the point the carpet ended and the linoleum began. It was a simple act, but one that required great skill nonetheless. If he misjudged his distance, even slightly, he wouldn’t get the whole itch before he ran out of plush, comfortable shag. Rocko trotted into the kitchen and Ryan dropped to his knees and held his arms open. “Come here, boy,” his human called. Rocko jogged promptly to him and let the ten-year-old hug him and scratch him behind the ears and under his chin. Ryan asked him the usual questions, same as every day. “Who’s a good dog? Did you miss me while I was gone? Are you ready to go play? Would you like a Milk Bone?” Humans matured slower than dogs, so Rocko barked with increasing excitement to each question. And twice as much to make sure Ryan understood his willingness to accept a Milk Bone. There were few things as good as those delicious, bone-shaped morsels. Real bones were nice, but all the flavor was on the outside and Ryan’s mother sprayed him with a hose last time he attempted to acquire some from a squirrel that forgot its place in the food chain. Ryan’s arm stretched up to the kitchen table and the bag of fireworks swung like a clock pendulum in his chubby little fist. Rocko’s head sagged at the sight. Ryan dumped out the contents. “Look what we’ve got, boy.” Ryan waved his hand at the stockpile. “I know you don’t like the loud ones. I got us smoke balls, sparklers, and Roman candles so we can still have fireworks without it scaring you.” The collie’s eyebrow raised slightly. Humans weren’t even polite enough to sniff each other’s butts, but his boy had been considerate enough to get dog-friendly ordinance for his yearly war on peace and quiet? Rocko buried his head into Ryan’s chest and nuzzled him softly. I love my human. Rocko licked the boy’s mouth to a chorus of excited giggles. Especially when he doesn’t wash all the pizza off his face.

Rocko chewed a mouthful of grass under his favorite tree. Two games of fetch and six Milk Bones were playing hell on his stomach. The chocolate Ryan’s mom dropped while making brownies might not have helped matters, either. Rocko shallowed the weeds thoughtfully. He’d never seen Ryan eating those brownies. She kept her own personal stash and Rocko couldn’t blame her. They made him feel great… and hungry.  Why do humans eat things that make them want to eat more things? He pondered. Bacon doesn’t make you want to eat anything other than more bacon. Bacon seems much healthier.  Rocko vomited precisely as he intended and then sprinted to Ryan’s side. His boy was striking the fire-maker next to a colorful ball. The fuse sparkled brilliantly and Ryan tossed it a few feet away. A plume of smoke rose from the orb with a soft hiss and a horrible stench.  “Too bad you can’t see the color, Rocko,” Ryan said. It’s blue, kid. Rocko wasn’t sure who decided dogs couldn’t see colors. He could see all three of them just fine.  Ryan throw another of the smoke balls. It was brown. It was also anticlimactic. Rocko appreciated Ryan’s efforts to include him in the festivities, but felt a little bad for him. The other kids were already starting in with their screeching rockets and boom sticks. Rocko’s butt tucked in as he scurried closer to the boy and away from ungodly explosion on the other side of the fence.  Heathens.  Rocko would try to tolerate it a bit longer so Ryan could enjoy his other goodies. The boy lit a pair of sparklers and danced about merrily, twirling patterns into the dimming sky. Rocko watched the devices spit gouts of color changing flame and found himself impressed with the show. It seemed a useless invention, but it was making Ryan happy so Rocko thought it was great. Almost as great as cartoons.  Rocko’s tail wagged excitedly. If Ryan had pizza at school, that meant it was Friday. Which meant tomorrow was Saturday and that meant it was cartoons and Lucky Charms day. It also meant he got to sleep on the bed all day. A sudden explosion brought him back to the present and he yelped, before curling into a ball at Ryan’s feet. Ryan knelt next to him and stoked his ears. “It’s starting to get loud now. I guess, that means it’s time for the big finale, Rocko. Let’s do some Roman candles and then we’ll go inside where it’s quiet and safe.”  Rocko sprang up and danced in a happy circle. The sooner they went inside the sooner it would be tomorrow. Ryan lifted one of the long sticks and pointed it into the air. Rocko observed the rest of them in their cellophane packaging while Ryan tried to light the fuse. The collie cocked his head at the tiny, human words written down the side. He looked up at Ryan and then back at the warning.  I’m pretty sure this says not to hold it, kid. Rocko barked to get his attention. Really, it says it right here in plain human. Rocko picked one of the tubes up and poked at Ryan’s leg. “It’s not for fetch, silly.” The boy laughed and struck the lighter again. The fuse sparkled to life.  I’m not trying to play fetch. Rocko growled urgently. You’re not supposed to—. The bang wasn’t that loud. It was muffled by Ryan’s closed fist.  Rocko whined mournfully as his boy collapsed to the grass.  Rocko sighed. Damn it. Ryan’s mom came running outside to answer the child’s screams. The shattered carboard tube sputtered and smoked beside him. She scooped her son up and ran back to the house. Rocko started to follow when he remembered something that seemed important. He turned back to retrieve Ryan’s thumb and bolted after them with the dismembered digit clutched gingerly between his teeth. The backdoor smacked him in the nose and he toppled off the steps. A series of explosions made him cower and he turned his eyes up to the fiery sky flowers blossoming overhead. He laid Ryan’s thumb gently on the steps and scampered to his tree. He was locked out. His boy was injured on his watch. He failed to keep Ryan safe and now he was trapped outside with the fireworks. It was a fitting punishment. He looked at the finger with its scorched knuckle and whimpered. Please be okay, boy. Rocko curled into a ball beneath the tree’s canopy. I don’t have thumbs and I do alright. I’ll teach you how to read human so it never happens again.

The blue sedan pulled into the driveway shortly after sun up. Rocko looked up expecting another false alarm, but saw the puffy plume of hair bobbing on top of the driver’s head and knew it was Ryan’s mom. He gave the air a sniff to verify and found the stench of her Aqua Net a welcome torment. He discarded his bone over the side of the porch. The best part was on the outside anyway. She opened the back of the car and Ryan stepped out with his hand tightly wrapped in an oversized bandaged. His face was sad, until he saw the ball of fur running to meet him. Ryan dropped to his knees as Rocko rushed into his arms. “I knew you’d be worried, boy.” Of course, I was. You’re my human. I’ll always worry about you. “We’re never having fireworks again.” Ryan kissed the dog’s snout. “I love you, Rocko.” _I love you too. _ Ryan’s mom screamed and it made both of them jump. Rocko spun quickly and relaxed. She was starring down at the thumbs he’d brought home to replace Ryan’s. One of them was sure to fit. The End